Our wide selection of rugged mobile phones are perfect for professionals working in dangerous or hazardous environments. We also have a number of sophisticated rugged smartphones for those who require advanced mobile telephony. Our tough phones and mobiles are designed for use in urban environments. Most of these are dust and waterproof phones, with some also being drop-proof, offering complete protection even in the toughest environments.

Rugged phones : water and drop-proof phones which will never let you down

What is a tough phone ?

There are many terms that can be used to describe this type of phone such as: unbreakable phones*, shock-proof phones, tough phones, durable phones, builders’ phones or even rugged smartphones. Each name has the same meaning, they all refer to mobile phones which are water, shock and drop-proof – regardless of whether they are mobile phones with buttons or top-of-the-range smartphones with tactile touch screens.

But, who are these phones for? These devices are very popular with working professionals who need a communication device they can take with them anywhere, safe in the knowledge that their phone will be able to withstand challenging working conditions. They can be helpful in many industries: from building sites, to factories, fire services, water and mountain rescues, farming, wood workshops, and many more. Using a rugged phone extends the lifespan of your communication device, which means you will no longer have to worry about your phone breaking. However, rugged phones are not designed solely for the world of work, they can also be used as part of leisure activities, including sports, hunting, hiking, etc. They can also be perfect for people who are clumsy and who often drop their smartphone. 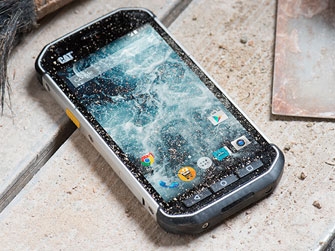 As mentioned previously, there are two types of durable phones:

How should you decide between a mobile phone and a rugged smartphone?

Rugged phones withstand the toughest and most remote environments, they can be used in extreme weather (such as in mountain ranges or deserts), high humidity, rain and can even survive immersion in water. Given the wide range of models available on the market, how should you choose the best option for your business?

It consists of two digits (IP68, for example):

If you need a rugged phone which is able to withstand dust and immersion in water (if you work near a water supply, for example), an IP68 phone would be perfect for you. This is also the most common model among smartphones.

In terms of shocks and falls, durable phones are also assessed against military standards. For example, if a phone meets 810G military standards, it means that the device has been tested to withstand falls of up to 1.8m onto concrete. You can check the screen resistance of a rugged smartphone using its Corning Gorilla Glass number. This number can range between 1 and 6: Corning Gorilla Glass 6 means that the screen is capable of withstanding multiple drops from over 1m height.

*No phone is completely unbreakable. Resistant models are certified by military standards of durability and can withstand drops of up to 1.8m onto concrete, depending on the model. 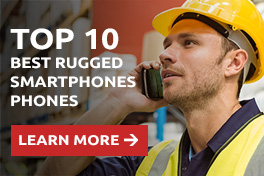